In 2020, roughly seven million Americans became first-time gun owners. Many of those joined the ranks of AR15 owners, one of the most popular styles of rifle in the United States. Yet, as popular as these rifles are, they are widely misunderstood, including by many of the people and politicians who want to restrict them or ban them outright. So, in the interest of setting the record straight, we thought we’d pass on a little knowledge about the ubiquitous AR15.

Let's start with the name.

Two Misunderstood Letters: A and R

You’ve probably heard or read a so-called firearms “expert” proclaim that the A and R in AR15 (also spelled with a dash: AR-15) stands for “assault rifle.” That’s wrong.

Or you may have heard this two-letter combination explained as being the initials for “automatic rifle.” Nope. That’s wrong, too.

The A-R combination in AR15 is merely an abbreviation for “ArmaLite Rifle,” ArmaLite being the company that developed the gun. The 15 is just the model number ArmaLite assigned to the rifle. So, the name AR15 does not give a nod to how this firearm could be used or how it functions. It simply means ArmaLite Rifle Model 15.

Just as most any firearm can be used for home defense or recreational shooting. How a firearm is used ultimately comes down to the operator and what they choose to do with it. But to label an entire style of rifle as an assault weapon is a gross simplification. AR15-style rifles can be used for a whole host of activities, including hunting, competitive shooting, recreational shooting, home defense, and, yes, military and law-enforcement applications.

It’s also wrong to think of an AR15 as an “automatic” weapon, because it isn’t one. The AR15 is a “semiautomatic”, not fully automatic.

You most likely heard members of the media or government talk about regulating or outlawing automatic weapons when what they’re actually referring to are semiautomatic firearms. There’s a big difference, and it all comes down to trigger pulls.

With an automatic weapon, the firearm will continue to fire if you hold the trigger back—until you release the trigger or the gun runs out of ammunition or malfunctions. But you only need to pull the trigger and hold it once for rounds to continue to fire at a rapid rate. It’s not the ratio of one trigger pull for every round fired of a semiautomatic.

The full-auto version of the civilian AR15 is its military cousin known as the M16, which has been widely replaced by the M4 Carbine and its variants. Military and law-enforcement variants typically feature a selector switch that allows the weapon to be fired as a semiautomatic, fully automatic, or in three-round bursts. (You pull the trigger and three rounds fire, then reset the trigger and pull it again to fire another three-round burst.)

It’s worth pointing out that, while the semiautomatic AR15 is often erroneously singled out as an “automatic” firearm, it is by no means the only semiautomatic gun available to civilian consumers. Semiautomatic firearms exist in all shapes and sizes, including sporting rifles, hunting shotguns, and pistols.

A Brief History of the AR15

The history of how the AR15 came to be easily warrants an entire article of its own. But, in the interest of time and space, here’s an abbreviated history of how this iconic rifle became one of the most popular firearms in American history:

As mentioned above, when you pull the trigger of a semiautomatic AR15, it should fire a round, extract and eject the spent cartridge, load a live round into the chamber, and reset the bolt carrier group so it’s ready to fire that next live round when you pull the trigger. This process is powered by the rifle’s gas system. There are two main types of gas systems used by AR15s: direct impingement and gas piston technology. Both work in a similar manner, with minor differences.

Direct impingement is the original gas system developed by Eugene Stoner. As the propellant gas from the exploding round pushes the bullet forward, part of that gas bleeds through a small hole (gas port) in the barrel and is channeled to the rear through a tube back to the bolt carrier group. The force of the gas pushes the bolt carrier group back and cycles the weapon.

Gas piston technology operates in a similar manner except instead of bleeding into a gas tube the gas is contained in a cylinder with a piston inside it. The propellant gas moves the piston rearward, and the piston pushes the bolt carrier group back instead of the “direct impingement” of the gas.

As with most any firearm discussion, be it barrels, rails, triggers, stocks, etc., you’ll find proponents and opponents of both styles of gas system. Daniel Defense favors direct impingement, which is why all of our AR15-style firearms feature this system. To learn more about the different length gas systems Daniel Defense uses and how they affect a firearm’s performance, check out this article on the best gas system for an AR15.

Anatomy of an AR15 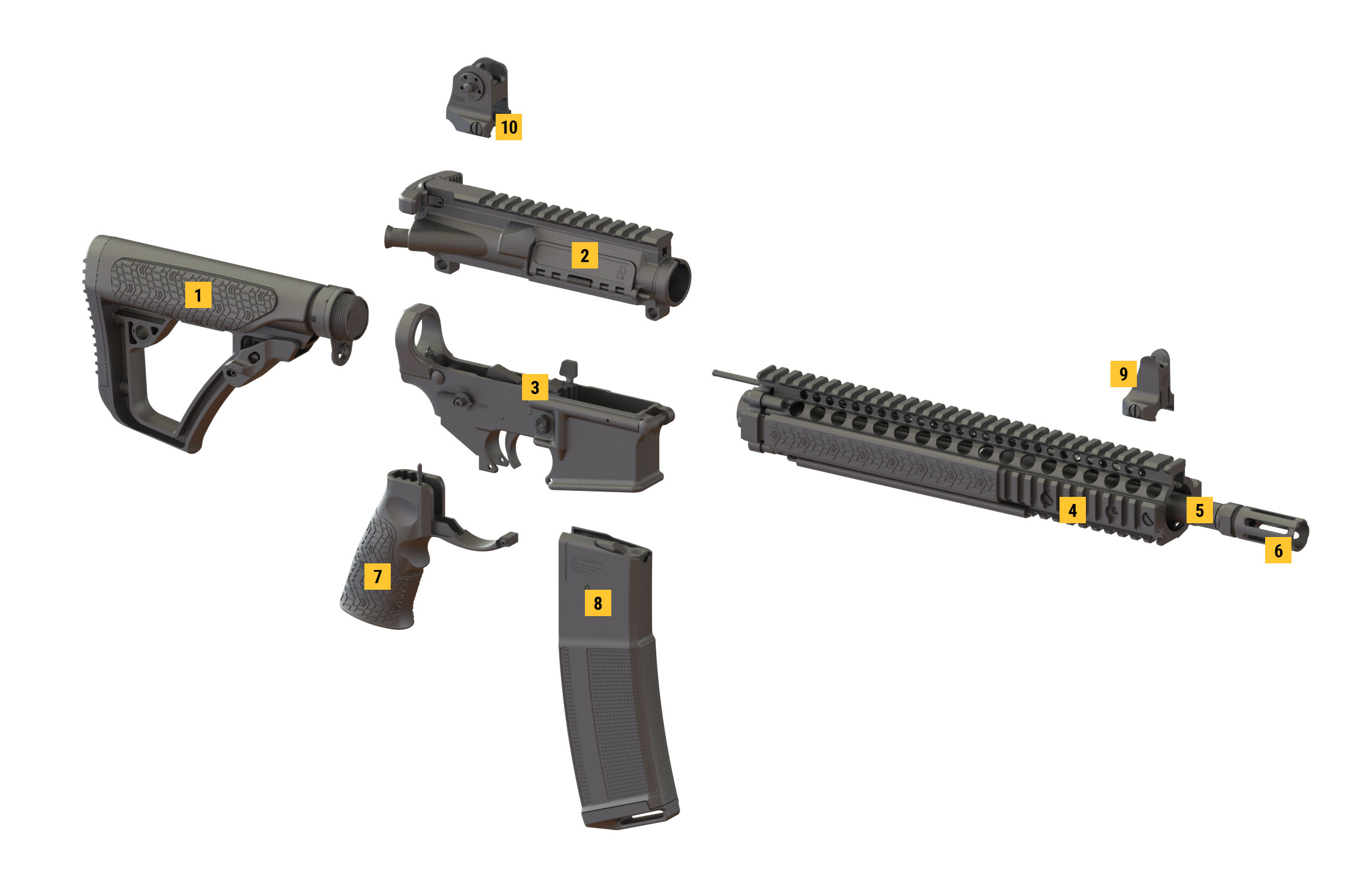 An AR15 is a very modular platform that can be broken down into a few key parts or groups, including:

What to Look for in Buying an AR15

We know, it seems like a lot to digest. But try not to be overwhelmed. The AR15 is actually a fairly simple rifle, which is one of the reasons contributing to its overwhelming popularity. If there’s anything we here at Daniel Defense can do to make things less confusing or answer any questions, feel free to give us a call at 866-544-GUNS.

Previous Next
8 Comment(s)
Thomas Doore
This article should be printed in every school house, and state and federal legislative body , and read on every TV news program every day for a month.
Reply
Trent Pinnell
Great Article! I just purchased my AR15 and an M4 Blackout. This article boiled down all the info I was too embarrassed to ask the dealer about. Plus they were understaffed and in a rush. Thank you
Reply
Ken Letchinger
Got my first AR-15 two weeks ago. I love it. I got the little brother to my Smith & Wesson mp10 which is the AR-10 version of it. Great gun at a great price and this was also great article thank you
Reply
Michael Bernard
Loved this article. It should be put in a small pamphlet and placed in the box of EVERY Daniel Defense AR sold to correct the masses on purchase
Reply
Richard Young
Great article and firearm! The gun grabbers call it an assault weapon because they think it will scare people that don’t understand firearms and gain their support. They want our guns for the same reason Hitler wanted Germany’s guns. They are Marxists and need to disarm the people to minimize our ability to fight back! It’s that simple!!! Never give up.
Reply
Nick Hannagan
Wonderful article! Anyone and everyone benefits from educating ourselves and discovering more about the history of firearms in our great country!
Reply
James Barickman
Very good description of an AR 15
Reply
Len Pinkey
Great article about the AR15. Have this published in the liberal news papers and magazines.
Reply
Load more comments