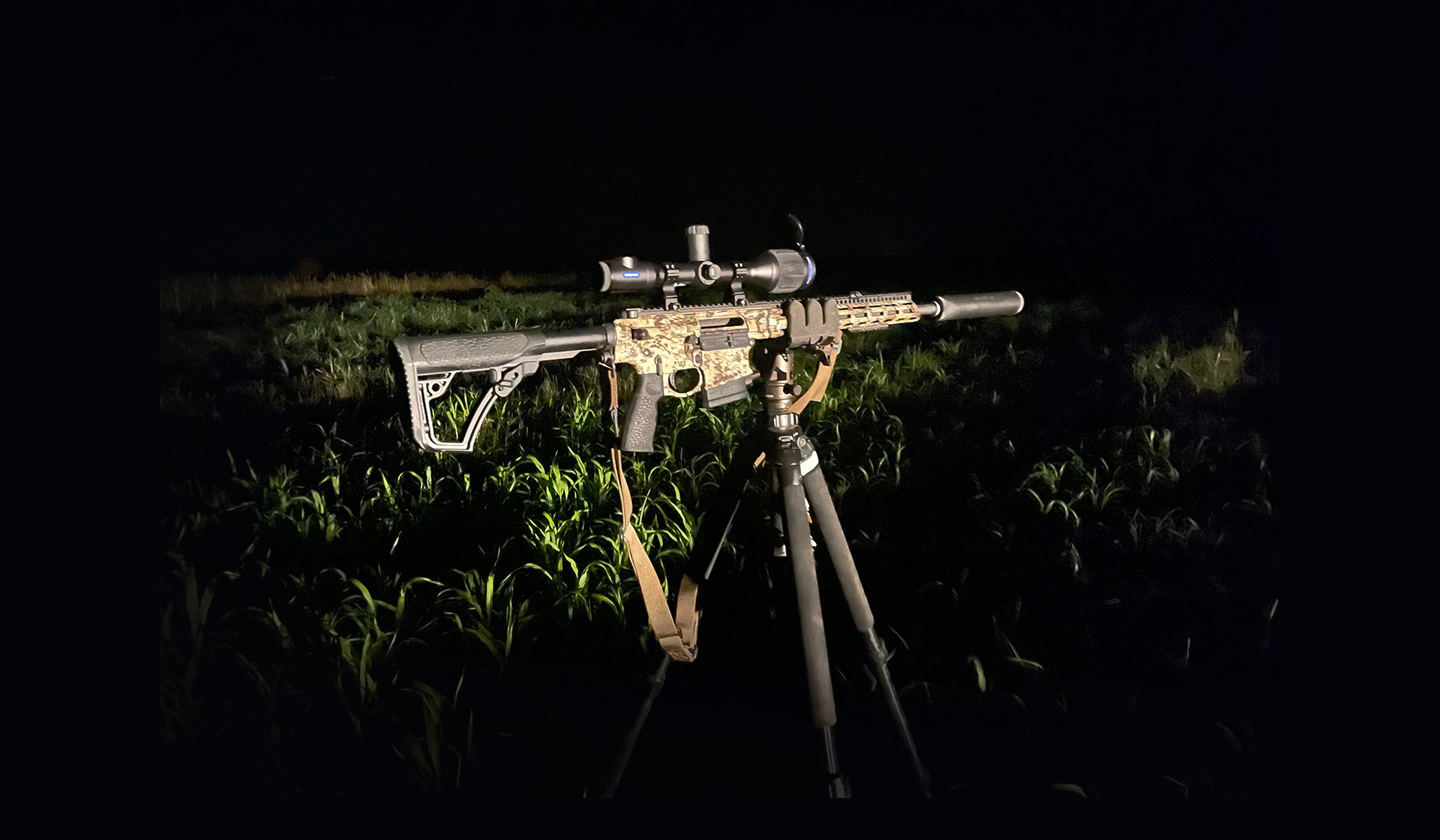 I recently hunted feral hogs in central Texas using the Daniel Defense DD5V4, chambered in .308, and coupled with a Pulsar Night Vision XQ-50 Thermal Riflescope. I stalked the hogs then took shots with the rifle resting on tripod, as is the norm. This type of hunting can involve a lot of walking, but it is well worth it if you are serious about getting hogs on the ground.

To be sure, there are a variety of ways to hunt the feral hogs that are ravaging fields, plundering crops, and destroying fences in southern and southwest portions of the U.S.

In some states—like Texas—you can hunt them on feeders. The feeders encourage the hogs to get on a routine and that, in turn, enables ranchers and hunters to be positioned near the feeder when the hogs roll in. (Hunting hogs out of a helicopter is also an option in Texas. This entails getting them on the run and then opening fire on them from above. And in Louisiana, it is possible to hunt hogs from airboats.)

It is also not uncommon for farmers/ranchers to trap hogs, then kill them once a certain number have been retained. In some states the hog meat is eaten, in others the benefit of getting rid of the destructive creatures is its own reward.

I hunted them in early August by stalking them on a ranch in Henrietta, Texas. I moved through the dark of night with Lone Star Hunts’ Luke Schaffner, who knows every nook and cranny of the ranch and is adept to finding the fields where hogs are most likely to be gathered.

Understand that hunting nuisance animals with a thermal scope gives you some advantages in the dark of night, inasmuch as it allows you see the animals clearly from long distances via heat signatures. However, using the thermal does not remove the need for hunters to remember the basics, like wind direction, the distance between the hunter and the animal(s), and the terrain that must be covered in order to get positioned for shot.

And hunting with a thermal does not diminish the importance of choosing the proper rifle, and round, for the hunt as well.

The .308 is without a doubt the most popular round among hog hunters with whom I hunt. The round delivers one shot, one-kill scenarios again and again. Such shots are both humane and financially beneficial, at time when ammo prices are through the roof.

Of course, neither the ammunition nor the thermal scope is of any benefit unless the rifle at the center of the hunt is quality. And this is where the Daniel Defense DD5V4 comes into play.

The DD5V4 is equipped with a Geissele 2-Stage Trigger, an 18” cold hammer forged steel, chrome-lined barrel, a 4-bolt connection system, and a buffer integrated in the bolt carrier group  for added recoil reduction.

Those of you who are technically minded see those DD5V4 features and immediately surmise the benefits they create. For those who are not as technically minded, suffice it to say the stability from the 4-bolt connection system and the reduction in recoil from the bolt carrier group translate into something every hunter wants: improved accuracy.

Compliment the stability and recoil reduction with a Geissele 2-stage trigger and 18” chrome-lined barrel and the potential for achieving repeatably accurate shots at long ranges increases exponentially.

So we have the right gun, how about we do some hunting?

Stalking feral hogs with Luke in early August meant climbing into the CanAm about 9 p.m. and heading out to the fields, stopping to scope the landscape as we went. (Depending on where you hunt, a pickup truck can be a perfect means of transportation too. In fact, I hopped in a pickup truck have traversed the perimeter of fields in Oklahoma and Texas in search of hogs too many times to count.)

Once you spot a group of hogs, you need to move until the wind is in your face. That way, you have the benefit of the dark of night and lack of scent. You can then park the vehicle and start a quiet walk toward the animals.

In addition to assessing distance we use the pause to be sure the hogs are not moving. A sound or smell from the other side of the field could startle them and drive them further way or, perhaps, even closer to us.

After that, it is lights out for as many of the destructive creatures as we can touch with bullet.

In the clip that follows I chose one particular hog and took a shot with the DD5V4 and it was one shot, one kill:

You may notice I did take a second shot in the video—at another hog—I got that hog as well but he was not visible in the footage because he fell behind the hay bale.

We loaded the hogs in the bed of the CanAm and began scanning other fields. Within 10 minutes, Luke spotted some more hogs. They were quite some distance to the West of us.

We closed the gap slightly while in the CanAm then stopped the vehicle, got out and stalked the beasts until we were approximately 100 yards out.

There were three large hogs and I dropped two of them. Against, the DD5V4’s stability, and recoil reduction combine to make staying on target easier and the Daniel Defense barrel and superb Geissele trigger make hitting the targets, feral hogs in this instance, quite easy too.

Here is footage of me taking two of the three:

As a parting note, I want to point out that use 150 Grain Soft Point .308 ammunition with the DD5V4.

You really need a round that punches through what it hits when you are hog hunting, as the sides of the hogs are very tough and thick. The 150 Grain Soft Point .308 will punch through with no problem.

AWR Hawkins writes on the Second Amendment and is the political analyst for Armed American Radio. He has a Ph.D. in Military History from Texas Tech University.