Predator Hunting with a DDM4V7 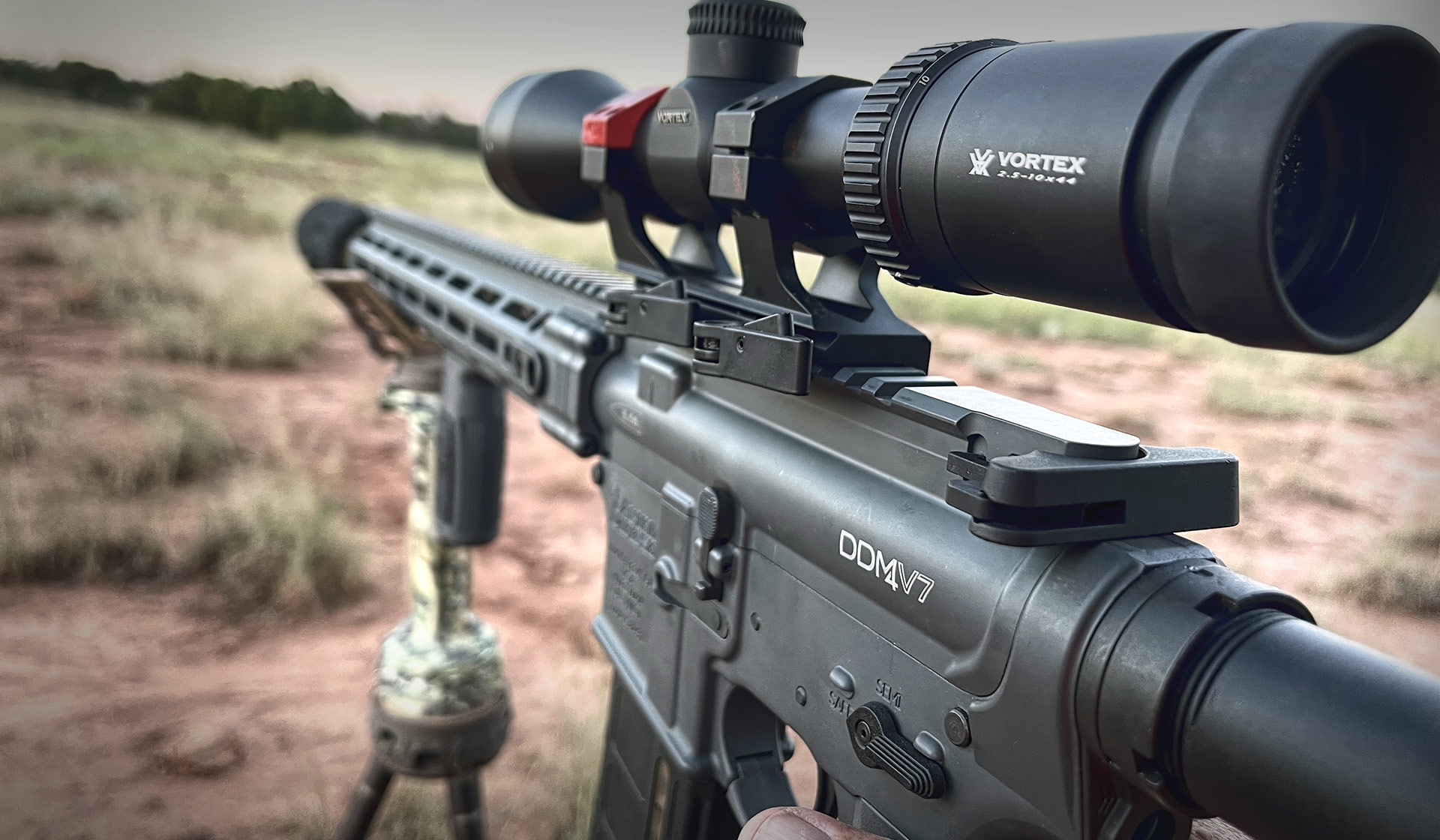 Predator hunting is an activity many Americans undertake numerous times each year. It is a way of preserving the safety of small animals, chickens and the like, on farms and ranches, and it is also integral to the safety of larger animals in places where wild cats and wolves abound.

I hunted coyotes last weekend with the DD4V7, coupled with a DD Wave suppressor, a Vortex Viper HS riflescope, and a Jim Shockey Trigger Stick tripod. I used 53 grain Hornady Super Performance 5.56 ammunition and the results were incredible.

The coyote hunt starts at the break of day and you position yourself in the mouth of draw so that the sun is to your back. I place an electronic call 30 to 40 yards out from where I plan to sit then nestle up under a tree or place my back right near a tree, thereby allowing the shadow of the tree to hide me.

A quick aside—Regarding the coyote call, they are ubiquitous at sporting goods stores or even on Amazon. Some ship with their own remote and some you can operate via an app on a smartphone. When hunting coyotes in Arizona we use a Lucky Duck brand call that has its own remote, but on hunts in East and West Texas, we use calls that work off an iPhone app and we have great results. The main thing in choosing a call is to be sure the call is programed with an array of sounds. (This is because you will cycle through a number of different call sounds in trying to draw in the coyotes.)

Once the call is set up and I am in the shadow of the tree, I fire up the call. I shift from one sound to another about every two minutes and watch the trees in the draw, hoping to see movement between them. If no coyotes have shown up within 12 or 13 minutes I shut it down, get in the CanAm, and move to another draw.

However, when you turn on the call and see movement, there is a remarkable adrenaline rush. I believe this is so because, regardless of the number of times I have hunted coyotes, I can never predict how they will come to the call. There are times they come slow but steady and other times they come quick for a short distance, then pause, then come quick again, then pause, until they are within shooting distance.

There are also times where the coyote literally charges from behind a distant tree, running in a straight line to the call. Or, as happened this past weekend, the predator may pop out from behind and freeze, zeroing in on the sound and checking to be sure the coast is clear. Time to pull the trigger.

After shooting the coyote I sat very still, both to keep from startling other predators who might be weighing a run at the call and to watch and be sure I did not need to take a follow-up shot on the coyote that was down.

No follow-up shot was needed, which is how I like it. The DD4V7 is incredibly accurate and the Hornady Super Performance Varmint ammunition is deadly. The combination of two in the field is remarkable. 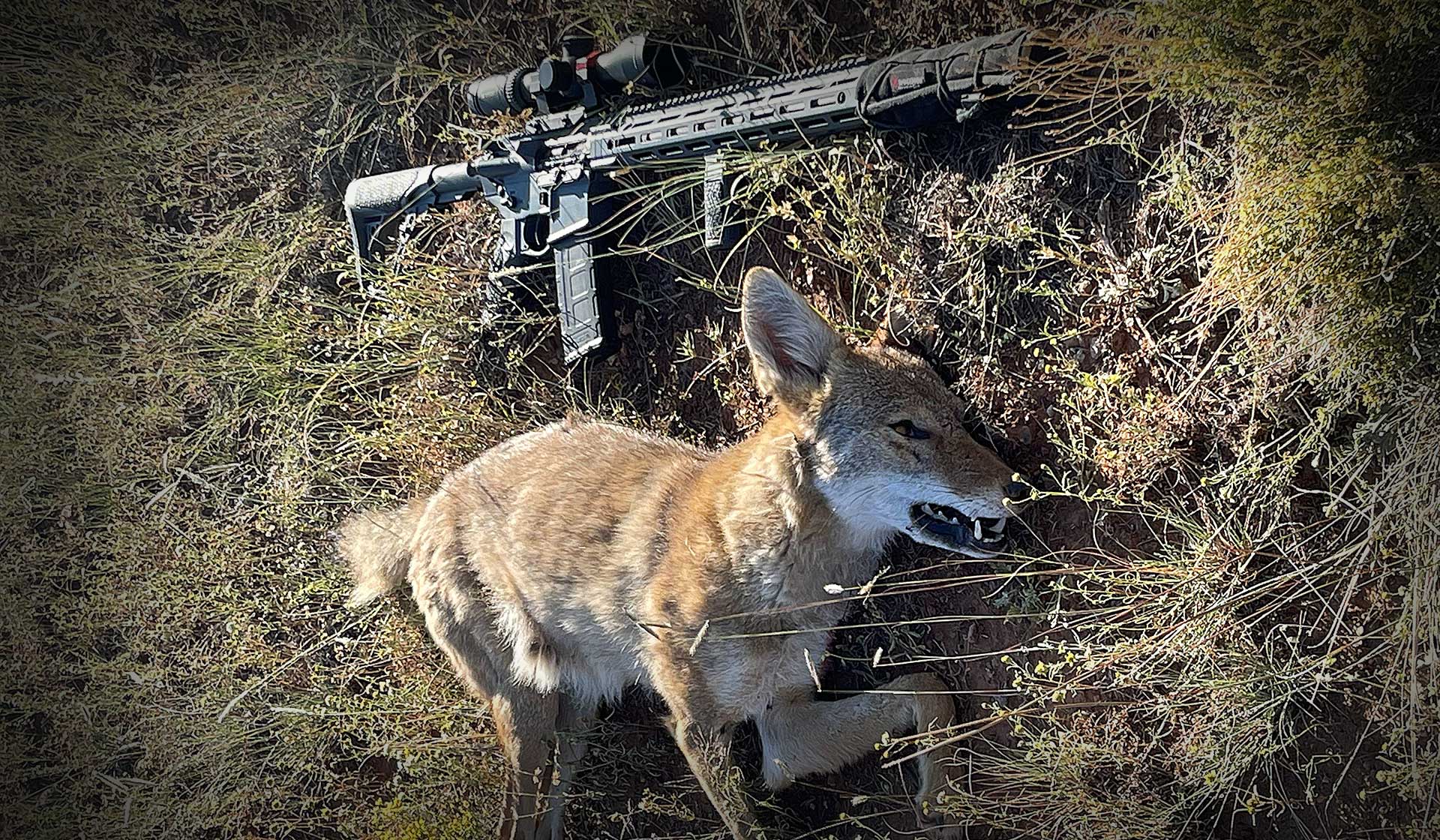 Hunting predators like coyotes is a great way to spend more time in the outdoors. And it is an economical hunt, compared to the costs involved in hunting large or exotic animals.

It is important to use a round that gives you one shot, one kill, capability without being overkill. In other words, I would not hunt coyotes with a 30.06. The 5.56 is a great round for hunting coyotes and the Daniel Defense rifle platform in 5.56 is a go-to for me. The function of the DD4V7 is flawless.

Lastly, if you live in the one of the many states that allow hunting with a suppressor, I encourage you to get a suppressor cover. The purpose of the cover is to protect your hands from the hot metal and to prevent the foam inside a rifle case from being melted by a hot, exposed suppressor. I use suppressor covers from Armageddon Gear and they work great.