Comparing the Features of the Daniel Defense Rifle Line 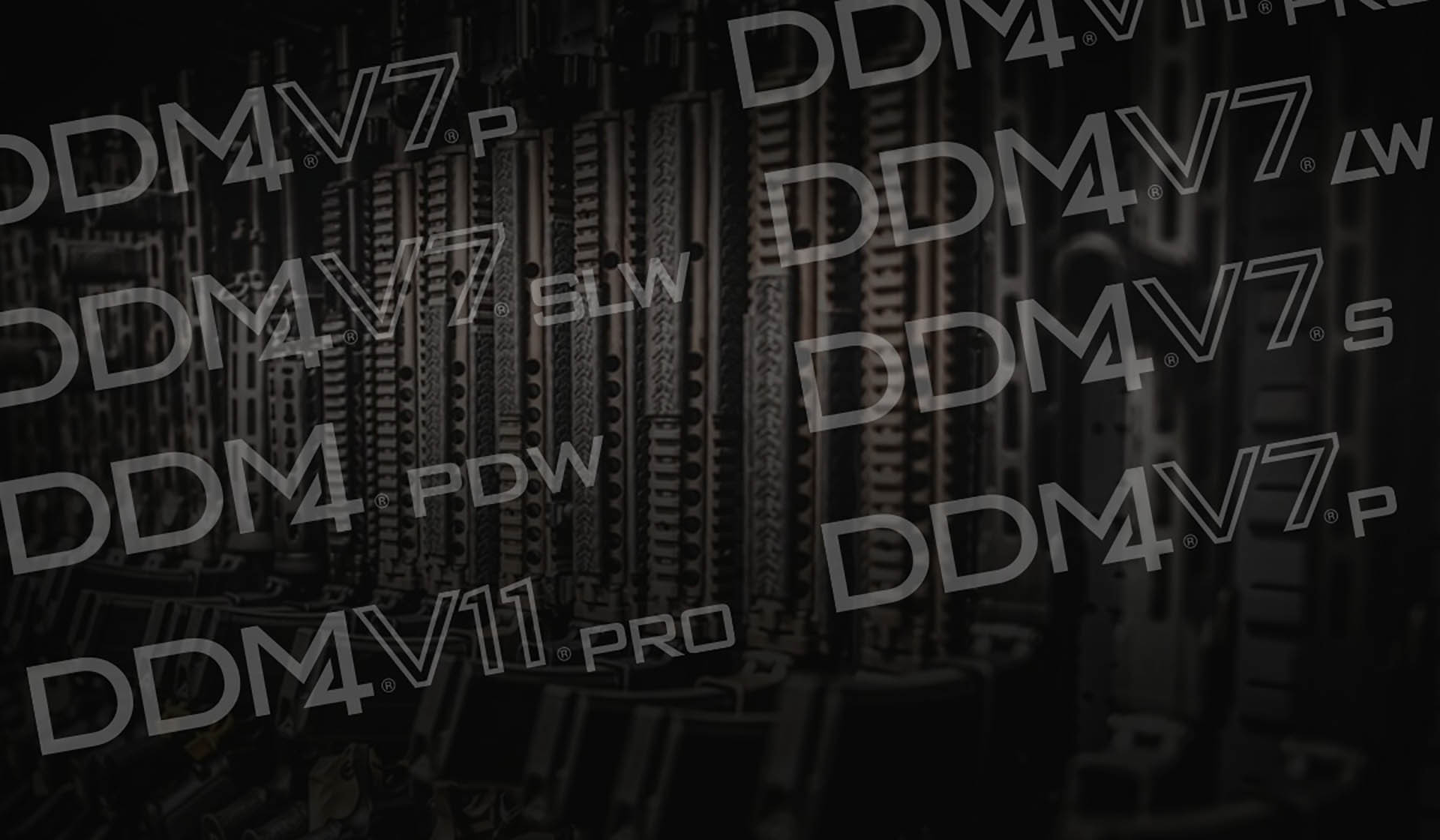 With dozens of firearms in the Daniel Defense product line, it can be tough to stay on top of the differences and nuances between the various rifles and pistols. So, we’re going to discuss a few of the major differences to help you better understand the defining characteristics of Daniel Defense firearms. We don’t have the real estate—or the time—to get into the specifications of every gun produced by Daniel, but you can familiarize yourself with the details of any firearm on our website or by downloading our catalog.

Let’s start where it all started for Daniel Defense firearms—with their DDM4 rifle line.

As the moniker suggests, these rifles are modeled after the iconic M4 carbine used by U.S. military forces. The DDM4 product line offers both rifles and short-barreled rifles (SBRs). There are also DDM4 pistols, but we’ll cover those later.

The difference between a rifle and short-barreled rifle is that an SBR has a shorter barrel or a shorter overall rifle length. Any rifle with a barrel that’s less than 16 inches is considered an SBR. Any rifle with an overall length of less than 26 inches, even if its barrel is 16 inches or longer, is also considered an SBR. This is an important distinction because possessing or purchasing a short-barreled rifle is restricted by the National Firearms Act. Daniel Defense does sell NFA-restricted rifles and suppressors; however, they do not sell them directly to consumers. For information on how to purchase one of these items, you should contact a local Class 3 dealer.

DDM4 rifles share many of the same features, which make them Daniel Defense products. Features like Cold Hammer Forged (CHF) barrels, an ambidextrous safety selector to accommodate right- or left-handed shooters, an ambidextrous Grip-N-Rip charging handle, flared magwells for easy insertion of magazines, and buttstocks with non-slip cheek welds and quick-detachment points. Most Daniel Defense firearms are also available in a range of durable Cerakote finishes that protect the rifle and make it undeniably attractive. So you know what you’re getting when you get a Daniel Defense rifle (or pistol).

While the furniture of the rifle can vary slightly with each rifle, the main differentiator of the rifles in the DDM4 rifle line comes down to what’s in front of the upper receiver. Which caliber is it? Which barrel length and profile does it have? What type of handguard does it feature?

DDM4 rifles are available in three main calibers: 5.56mm NATO, .300 AAC Blackout, and 6.8mm SPC. While there are pros and cons for each of these calibers, and reasons you may be attracted to one over the other, the majority of DDM4 rifles are chambered in 5.56mm.

DDM4 barrel lengths range from seven inches (on the DDM4® PDW) to 18 inches. The cold hammer forged (CHF) barrels come in five barrel profiles—M4, Government, Lightweight, Strength-to-Weight, and Stainless Steel. The barrel profile has to do with the weight, cut, and overall strength of the barrel. Every barrel is matched with the appropriate-length gas system (Pistol, Carbine, Mid, or Rifle length) to optimize dwell time and rifle performance.

Some DDM4 rifles (and DD5 rifles and DDM4 pistols) have a suffix at the end of their name to designate additional information about the weapon. This is what they mean:

DDM4 V1:  This 5.56mm rifle is Daniel Defense’s original flagship rifle, introduced in 2009. It features a 16-inch M4 profile barrel, a Carbine length gas system, and a 12-inch DDM4 FSP rail with a Picatinny attachment system and a Forged Front Site Base.

DDM4 V7: This is Daniel Defense’s most popular rifle configuration. It’s chambered for 5.56mm ammo and features a 16-inch barrel with a Mid-length gas system. A 15-inch MFR Rail with seven surfaces for accessories features an M-LOK attachment system.

DDM4ISR: This Integrally Suppressed Weapon System is optimized for the .300 Blackout cartridge and features a fully integrated suppressor that’s pinned and welded for fulltime suppressed fire. The permanent suppressor extends the barrel length to 16 inches, so only one ATF tax stamp (for the suppressor) is required to purchase this rifle instead of two.

DDM4 PDW: Classified as a “personal defense weapon,” this short-barreled rifle features a seven-inch barrel and an overall length of only 20.75 inches, making it excellent for transporting and perfect for storing in a car or truck. It’s chambered in .300 Blackout and features a six-inch M-LOK rail and Maxim CQB Gen 7 stock.

DD5 rifles are also AR-style firearms but are designed for longer-distance shooting. Barrel lengths range from 16 inches up to 20 inches, and they’re all Strength-to-Weight barrel profiles to easily handle the larger loads these rifles are designed to shoot. The DD5 line features rifles in three calibers: 7.62mm, 6.5 Creedmoor, and .260 Remington.

Unlike DDM4 rifles, DD5 rifles feature an adjustable gas block—easily reached through the rail—which allows for consistently reliable suppressed shooting by reducing blow-back and making the gun eject just as smoothly and reliably as when un-suppressed. Some rifles, like the DD5 V5 also feature an entirely new gas system, the Rifle +1, which dramatically smooths out the rifle to help make your long-distance shooting experience more comfortable and enjoyable. The “Hunter” rifles also feature a Geissele SSA 2-stage trigger for surgical trigger control to hit those long-rang shots.

Otherwise, many of the features found in the DD5 line are similar to the DDM4 line—features that make them definitively Daniel Defense weapons.

DD5 V4 HUNTER: This rifle is available in .260 Remington, 6.5 Creedmoor, or .308 Winchester. With an 18-inch barrel designed for long-range shooting and a 2-Stage Geissele semi-auto trigger, depending on which caliber you select, this rifle can bring down most any North American game animal.

DD5 V5: This rifle (along with the “HUNTER” version) features a 20-inch barrel, the longest in the DD5 series. Its longer barrel provides even more accuracy on long-range shots, and it’s available in two of the top short-action cartridges available on the market: .260 Remington and 6.5 Creedmoor.

To be classified as a pistol, a firearm cannot have a stock, like a rifle does, or a vertical foregrip. It can, however, feature a stabilizing brace. By having a stabilizing brace instead of a stock, a Daniel Defense pistol is not considered a short-barreled rifle and does not fall under NFA restrictions.

DDM4 PDW PISTOL: Similar to the DDM4 PDW short-barreled rifle except, because it features a brace instead of a stock, this weapon, chambered in .300 Blackout, qualifies as a pistol and is not NFA regulated.

DDM4 V7P PISTOL: This maneuverable pistol, chambered in either 5.56mm or .300 Blackout, pairs a 10.3-inch barrel and an MFR nine-inch rail featuring an M-LOK attachment system. It has an adjustable SB Tactical SBA3 Pistol Stabilizing Brace to help you dial in just the right amount of comfort and support when firing. The V7 P with LAW Tactical folding adapter features the SB-Tactical SOB Pistol Stabilizing Brace.

Hopefully this article has, at the very least, helped you to understand some of the differences between Daniel Defense firearm categories. And, at best, to understand some of the differences between the firearms within each category. Once you’ve identified a weapon or two that looks like it might meet your needs, do some additional research, both on Daniel Defense’s website and on the internet. Choosing the right firearm is a lot like choosing the right car. You want to make sure it’s going to be a good fit before committing to buying.

Previous Next
3 Comment(s)
Leo Barahona
What makes the rifle California compliant? Is it just the number of rounds that a magazine can carry?
Reply
Guy Willette
I'd like to have a Daniel Defense lower receiver to match a Daniel Defense upper receiver I bought through Brownells..... Flat Dark Earth, if possible.
Reply
Randy Smith
I would be proud to have any of your weapons, in reality they are more of a work of art, and engineering. I will continue to save and wait for my chance.
Just keep doing what your doing.
Reply