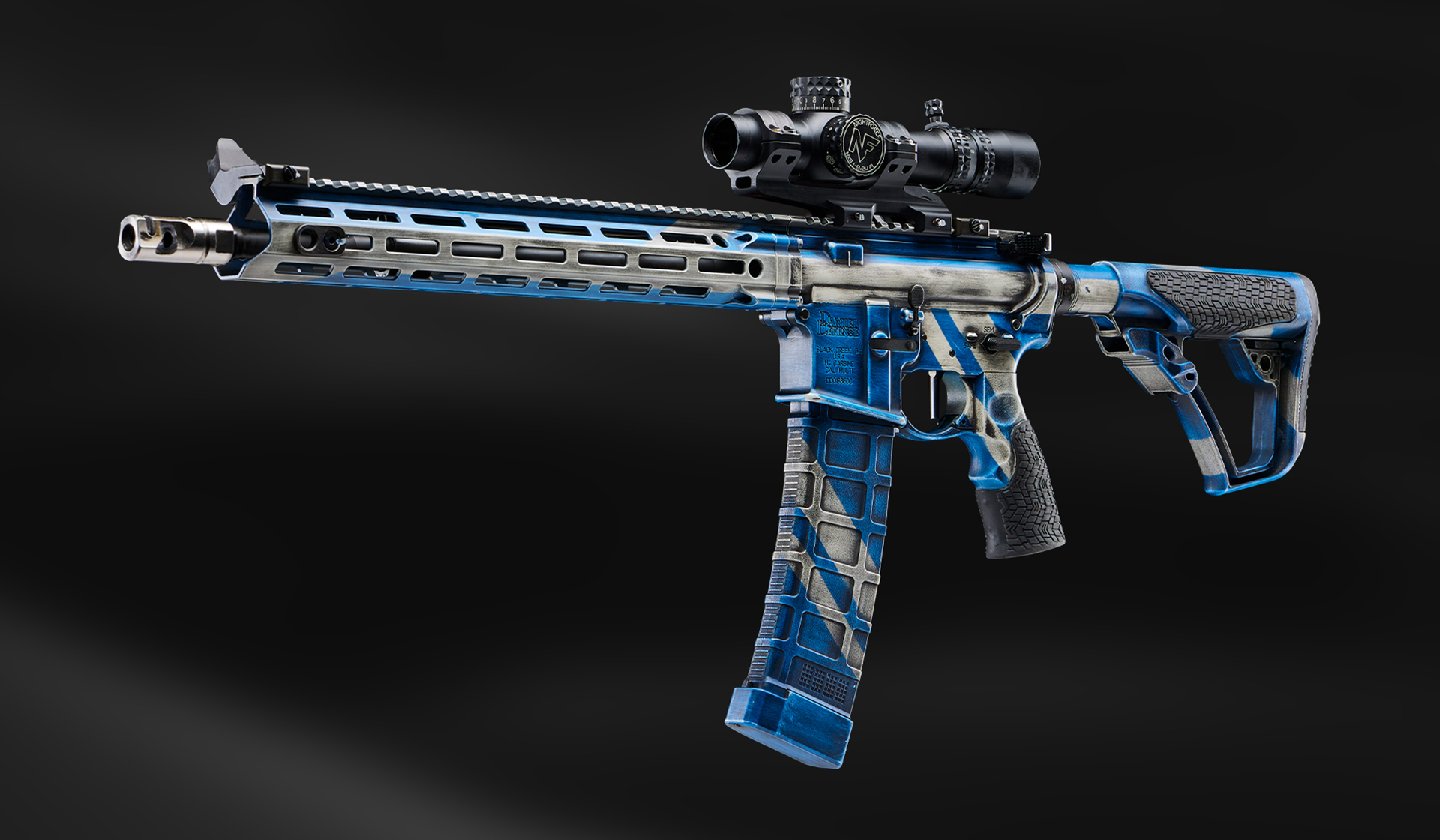 Each and every Daniel Defense employee takes pride in our firearms no matter the position they hold with the company - from customer service reps, engineers, manufacturing techs and more.  And that pride equates to being a fan of the brand in their "off hours" - with many employees owning Daniel Defense firearms and enjoy sending thousands of rounds downrange. In this post, we are taking a look at Chris M.'s set up.  Chris is a warranty lead with Daniel Defense - and from the looks of it, has put in a ton of time making this V7 SLW truly one of a kind!

DD: What Daniel Defense firearm are you sharing with us?

CM: Short answer is a slightly modified DDM4 V7 SLW. Longer version is she started life as a DDM4 V5 back in 2013, well before any of the Short Light Weight configs existed. A few years later, I scored a custom upper receiver through our employee purchase program - it had a 14.5” Lightweight Mid barrel and no muzzle device. I had a pre-production prototype Gen II Muzzle Climb Mitigator pin and welded on the end. Once the MFR 13.5” M-Lok handguard was released, I had to have one on this gun. At less than 6lbs naked, she is a fast handling and capable blaster that is fun to shoot.

DD: What made you choose this Daniel firearm specifically?

CM: This gun is definitely unique and just so much fun to run. The DDM4 V7 SLW is such a handy and versatile platform and has been my favorite Daniel Defense configuration for a long time.  I have used it for everything from local 2/3gun matches to hunting deer and pigs. It can be set up to handle most tasks you could ask an AR15 to do. Moreover, if I am honest, I really relate to this gun quite a bit. Anyone who knows me and has shot this gun would agree, we are both short and loud.

DD: What is the main purpose/role for this Daniel for you?

CM:  I made this set up for “Tac Ops” division in 3-gun style games (referred to in the rulebooks as “Tactical” in USPSA, or “Tactical Optics” in UML). I wanted a lightweight and quick handling blaster for short to medium range 2-gun and 3-gun style shooting. Our local Club, 17 South Rod & Gun, has ranges out to 525 yards but most of our shots are sub 200 yards. I also use it for other range purposes and have even shot some deer and hogs with it. She is a handy and capable firearm, but she is devastatingly loud with the brake. You do not want to be standing next to it when she is running.

DD: What has been done to it? Any details? Modifications?

CM: Well the most obvious mod would be the Cerakote job done by C&B Quality Coatings in Savannah GA. Chris of C&B, has done a great job on my entire 3-gun set (rifle, pistol, and shotgun) that match this color scheme. The idea came from my 8-year old son and C&B brought it to life.

Mechanically, I do my best to avoid compromising the reliability or the performance of this fantastic rifle. I have seen too many people on the quest to throttle up performance accomplish the opposite. They try to “tune” their gun but when it gets dirty or some other variable (like ammo) changes and the gun is not reliable. On this gun, I kept the barrel, gas system, BCG, spring, and buffer stock. She has more than 14,000 rounds down the pipe so far and still shoots great.

I like trying out AR triggers and there are sooo many options in the AR triggers on the market. I swapped them out many times trying out a different options from Geissele, CMC, Hyperfire, AR Gold and Trigger Tech.  I just installed the Timney DH3 to give that a whirl. So far, they all work well and everyone is going to have their personal preferences. Honestly, I know that no matter what trigger I am using, if I do not put in the dry fire and live fire practice, I am going to suck anyway. I just do my best to suck safely.

Currently, I am running our standard SOPMOD Ambi Semi-Auto Selector with two long arms. Normally, she is running the Radian Talon (which is a fantastic selector), but I swapped it to another build. To be honest, initially I did not like the long lever on the ejection port side but quickly came to appreciate the design. When I am using a false grip from the bench or prone, that long lever makes a great “Gas pedal” for the thumb.  It also makes it very easy to feel if the firearm has come off safe when the slung rifle rubs against gear. Since, I let many people try my rifle out at our club matches and DD University, it is nice to have as close to “normal” manual of arms to avoid confusion. Moreover, at my current ability level (or lack thereof), a reduced throw selector is not going to be any faster for me.

As for the Muzzle Device, it is a “Jimmified” Gen II Muzzle Climb Mitigator. The MCMII is standard equipment on the DDM4v7PRO. This brake counters recoil and muzzle rise by redirecting the high-pressure muzzle blast through a series of ports. This makes them popular with competitive shooters, however, they tend to make each shot sound much louder to those near the shooter and shoot a gigantic flame straight up in low light. Therefore, they are not a great choice for defensive firearms. This particular brake started life as a pre-production prototype my old boss gave me to use when I was in our Marketing Department. One of my shooting mentors and 3-gun competitors, Jimmy Oliver, spent some time tinkering with the design on his DD rifles and tuned it for his gear. Since my rifle is equipped with a 14.5” barrel, the National Firearms Act requires me to permanently attach the muzzle device; I cannot simply adjust the orientation of the brake. Therefore, I modified the pinned brake for a right-handed shooter by adding an addition port to the right side and threading the top holes and capping the left two with setscrews. This changes the way this fast handling blaster recoils, staying flatter in rapid fire resulting in tighter doubles when it’s time to go fast.

DD: Is your Daniel "done" or are there any changes you plan to make to it?

CM: If I need to modify it to fit a division requirement I will but otherwise, I will probably leave this one alone. If and when I ever shoot out this barrel (14k and counting), I may switch to a stock extended flash hider found on the stock DDM4 V7 SLW or a suppressor adapter. We shall see.

DD: What other essential accessories do you use?

CM: Lots of Mags. Big Mags. Little Mags, Medium mags.  Shown are 40 round Magpul Pmags with +6 extensions for 46+1 starts. If the match allows for it, I run D-60 drums although I honestly hate loading them. On my belt, I run DD 32 round mags and sometimes even just 20 rounders if there is a tight shooting position I need to squeeze into. Since the mags are routinely stomped into the dirt, I keep a mag brush in my ammo cans. If any dirt or fouling gets in the mag, I take the bases off and clean the mag bodies and followers well. Keeping the mags and ammo clean is critical to a good day at the range.

Ammo: if the target is 4 MOA or larger (which most are much larger) and within 200 yards, I run 55 gr ball, brass cased ammo, usually an M193 equivalent. I zero my gun with match grade ammo, usually in the 69-77 gr range. I use that on targets smaller than 4 moa or farther than 200 yards.

If I take it out for pigs, I run either the Barnes TSX or Hornady GMX. Bonded soft points like the Gold Dots or Federal Fusion works well too.

DD: How does one find 3-gun matches or other gun games in their area?

CM: Most matches are posted on PractiScore. Find events in your area and bring whatever guns/gear you have.  The shooting community will help you get started. 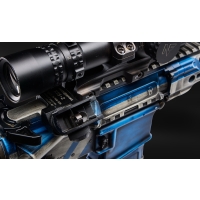 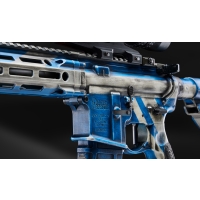 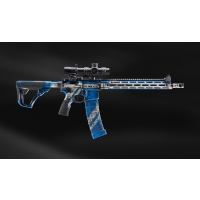